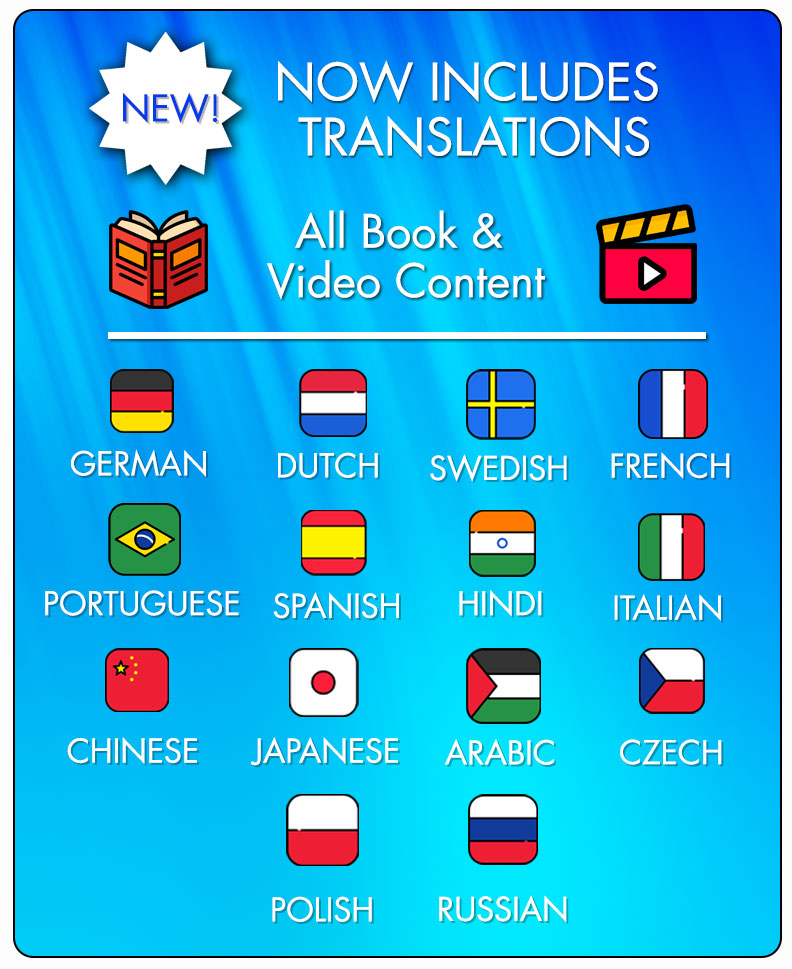 Do you feel trapped inside your own head?

Like there's a pane of glass between you and the rest of the world?

Do you feel as if time is distorted or fragmented?
Like you're a robot or the people around you are robots?
Like your hands and legs aren't really yours?

Maybe you've spent hours, and even days, searching the Internet for a cure? Looking through many websites, forums and books for snippets of conflicting information on how to deal with this horrible disorder? Maybe you've had to deal with doctors who know little or nothing about the treatment of this condition, who may not have even heard of it?

One night in 2005 I suffered a massive panic attack which caused me to develop Depersonalization Disorder overnight. It hit me out of nowhere and it completely changed my life. I had to quit my job and move home. For 2 years I suffered with this condition, through every waking moment. It was a living nightmare. And if you're experiencing the same symptoms - and especially if you've had a recent trigger incident (like a panic attack or a bad experience on drugs) -- there's a strong chance you may have developed Depersonalization.

I understand that it's frightening but there's 5 things you need to know right now:

1. It's Not Dangerous
You're perfectly safe. You're not going crazy. It won't turn into anything worse.

3. It's Perfectly Natural
DP is your brain's natural reaction to intense stress. It's perfectly normal and it's meant to be temporary. In fact, for most people it passes in a few minutes.

4. It Doesn't Matter What Caused It
It's typically caused by a bad reaction to drugs like weed, cannabis or LSD. But it can be brought on by many different factors. It doesn't matter - it's still driven by anxiety.

5. You Can Recover
It's 100% caused and driven by anxiety. The only reason it's persisting is because you've been focusing on it. You've been thinking that this natural defence system is you 'going crazy' -- which makes you more stressed out and makes the stress defence mechanism last even longer than it should. You don't need to be afraid of it and you can absolutely recover from it.

Find Out More About Depersonalization Here

The DP Manual is the result of carefully documenting my own recovery, and the 15 years of working with 1000s of DP/DR sufferers since.

I wrote it as the ultimate guide to understand and recover from DP, the guide that I wish I'd had when I first developed Depersonalization and Derealization. A guide that would have saved me months, even years of pain.

Since its first edition as a small ebook in 2007, the DP Manual has expanded and gone on to become a full recovery package -- and is now the oldest, most trusted guide to DP/DR recovery currently available.

It has sold over 25,000 copies, and as of this year, now comes in a brand new, updated & expanded edition with FREE bonus materials including FAQs and audio relaxation program -- and a FULL unabridged audio version of the DP Manual, as read by the author. 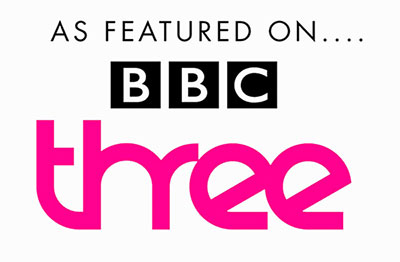 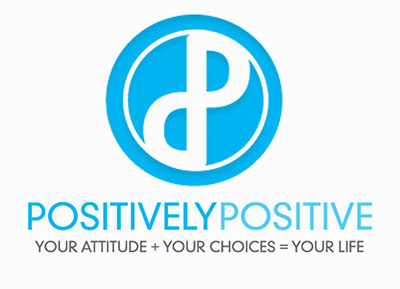 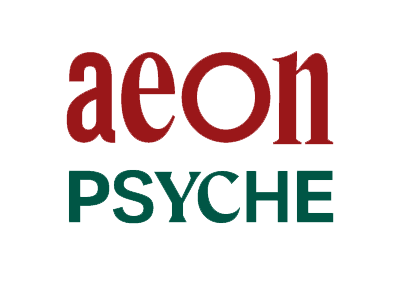 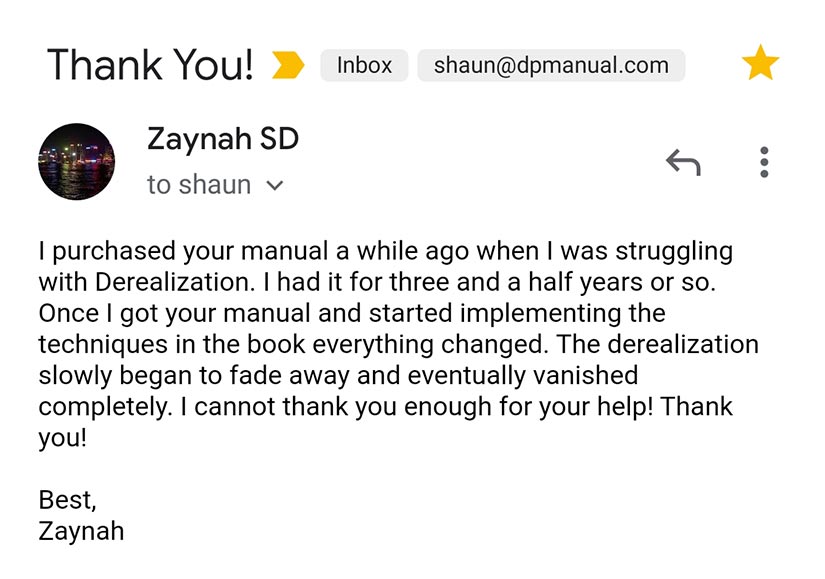 RESEARCHING DP/DR WILL NOT HELP!

Why spend any more time on forums and websites that give vague information, scare stories and arguments? Believe me, that will not only delay your recovery, it will make the condition worse. I have been through this condition myself and have personally helped 1000s of people around the world to recover from DP/DR. And no -  it doesn't matter if you developed DP from weed or any bad drug experience, from a panic attack, from trauma.

The condition is always the same, as is the road to recovery.

So don't worry -- I'll tell exactly what you need to know! 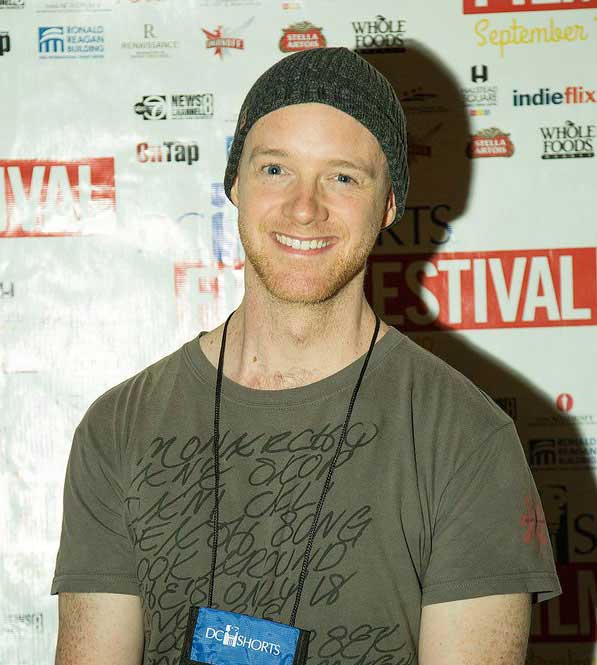 Hi! My name is Shaun. I'm a multi award-winning filmmaker, photographer and writer. And I lost two entire years of my life when I suddenly developed Chronic Depersonalization and Derealization Disorder (DP/DR) from 2005 to 2007. Believe me, I know the tremendous pain and anguish that the condition can cause, I've been there.

Once I'd figured out what DP/DR was, I was so frustrated to find that I could not find any specific guide on how to deal with it. There seemed to be so much conflicting, scary information out there! Even the anxiety recovery programs that mentioned DP/DR only referred to it briefly as a symptom, not the constant feeling I had every day for 2 years. Like so many others, I was forced to figure out the nature of DP/DR through a long, slow, painful process of trial and error. But I was still determined to get out of it.

And I recovered completely, beating Depersonalization and Derealization 100% and getting my life and career back on track. And I wrote the DP Manual as the guide I wish I'd had on Day One. To explain to me exactly what I was feeling, why I didn't need to be afraid and how I could recover completely.

And in the years since, the DP Manual has grown to become the most authoritative guide to DP/DR recovery, helping thousands of people around the world to recover. And you can too with the definitive Depersonalization and Derealization recovery package, The DP Manual.