There tends of be a LOT of confusion out there about Depersonalization, what causes it, and if recovery is possible.

So let's clear this up once and for all:

And here's why, in 3 simple steps!

1. It's Caused By Anxiety

Firstly, so much of the fear about Depersonalization being a permanent condition can be put to bed by understanding a simple fact:

Depersonalization is an anxiety-spectrum condition.

That's not just me saying it -- it's what all the scientific and anecdotal information says too.  The feelings of detachment, the strange fear, the anxious thoughts - all of it is caused by anxiety.

Depersonalization is your brain's natural response to trauma. That may be from violence, a car crash, a panic attack, a bad experience from smoking weed etc.

Your brain thinks it's in danger, so in order to deal with the perceived trauma, it kicks in with 'fight or flight' response.  This has two results:

A: Your body goes on high alert. This means that your pupils are dilated, your hearing is more sensitized, your heartrate increases.

B: In order to get you out of the dangerous situation,  your brain 'pulls you away' from the danger. This basically means that when you're faced with danger, you don't curl up into a ball and cry! Your brain makes you feel disconnected from the danger so that you can remove yourself from the situation. This is why so many people report walking calmly out of car accidents or burning houses calmly, or with no recollection of the incident at all.

In evolutionary terms, this is the same thing as your ancient ancestors seeing a wild animal in the forest. Their body and brain go into 'fight or flight' mode in order to get them safely back to their cave!

The problem is that if the feelings of Depersonalization and 'fight or flight' happen when you're sitting at home, smoking weed, that's a very different situation.

All of a sudden you have these intense feelings of panic, fear and of being disconnected from your body.  There's no wild animal. There's no danger.

A natural part of any anxiety-based condition is the fear that it’s incurable. That you'll be stuck with it forever.

So when you think about DP, it’s not surprising that one of the most basic fears about the condition is that Depersonalization recovery is not possible.

Doesn't that make perfect sense? In fact, it would be surprising if you didn't have that fear!

So the Depersonalization itself -- AND the fear that's incurable -- are both 100% caused by anxiety.

That means that if you can reduce the anxiety (which you can!) you can reduce and stop the Depersonalization completely, and all the fears that go with it.

2. The Condition Makes Itself Worse

But you might argue, "I've seen so many people on forums who have had DP for years, decades even. They haven't recovered and they probably never will."

We'll get to that in a minute, but first, let me respond by saying that the Depersonalisation recovery stories are also out there.

They’re on websites, they’re in forums -- but not nearly as much.

Why is that? Because the people who recover are not on forums.

Think about it -- If you figured out that discussing and researching your condition was a huge factor in prolonging it (as it is with DP and all anxiety-spectrum conditions), you’d avoid it like the plague. Right?

That’s why the forums are chock-a-block with people who haven’t recovered.

Depersonalization, like all anxiety-spectrum conditions, are self-perpetuating. What does that mean?

It means that the condition makes itself worse. Anxiety is caused by the fear of anxiety.

You see, Depersonalization is an extremely common feeling. 50% of people will have a Depersonalization episode at some point in their lives. It's a perfectly natural response to trauma and stress. But it's only supposed to last for a few minutes and then pass.

It's only when you focus on it, worry about it, worry that "I'm going crazy", and think of it as something that you should be scared of, that it becomes a problem. And if like I did, you spend days and weeks researching the condition, looking on forums etc, you're only obsessing about the condition and making it worse.

Take that fear away and the feelings will subside. And your total Depersonalisation recovery will soon follow.

Have you heard of Occam’s Razor? -- It's a problem-solving principle and one of the basics of logical thinking. It says:

"All things being equal, the simplest explanation is the most likely."

When it come to anxiety condition like DP, people can often jump to really strange, frightening conclusions. I know I did.

At one point I was sure I had Schizophrenia, and at another point I was 100% positive that the condition was going to make me literally disappear off the face of the earth.

In retrospect it seems so ridiculous, but at the time I was crippled by these fears -- and again, the biggest fear being that I would never recover from Depersonalization.

That you have flipped into some sort of alternate reality from which there is no escape?

That the hundreds of thousands of people who have recovered from it are lying, both to you and to themselves?

That all of the scientific research that tells us that Depersonalization is an anxiety-spectrum condition and nothing more -- is also wrong?

That as all the anecdotal and medical evidence suggests, DP is just a temporary anxiety-based condition and can be recovered from completely?

Of COURSE the answer is 'B'.

The only reason you would take 'A' seriously at all is because of anxious thinking itself. Doesn't that make perfect sense?

And no I’m not talking about learning to live with it but it’s always there in the background -- I mean, total, 100% recovery. I know this because I've done it myself.

For two years, my life was ruined by Depersonalization. 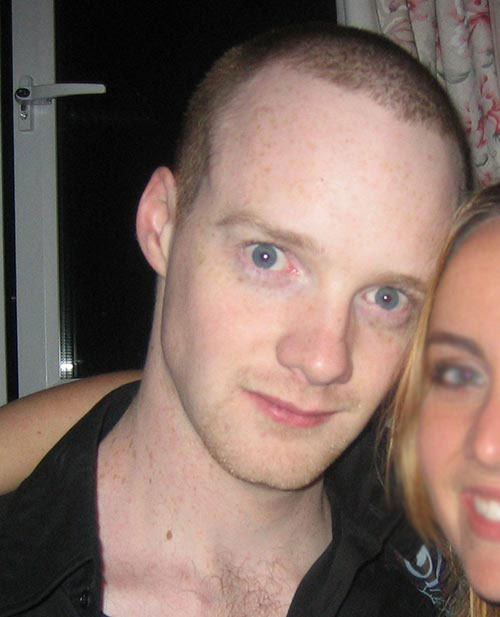 See that picture? That was a few weeks into my nightmare with DP.

I was as pale as a ghost and had already started dropping a dangerous amount of weight. And though I'm forcing a weak smile, I was absolutely terrified. I had almost totally stopped sleeping.

I stopped working. I had to move home with my parents. I was frantically looking for an explanation for how I was feeling.

And once I found out that it a name, I spent all my time looking up websites and forums for tips on how to recover from Depersonalization Disorder.

I was obsessed with it. I thought about it literally every minute of every waking hour.

It completely consumed my life.

How bad was it? Well, that in the thousands of cases I’ve encountered over the years, I still rate my own experience as having been particularly intense. (Read more about my Depersonalization story)

I don’t know if it was factors in my personality, my tendency towards introspection etc, but I had a truly horrible, crippling experience with DP.

When I was frequenting forums and searching frantically for a cure, I firmly -- FIRMLY -- believed that I was never, ever getting better. That awful despair stayed with me for months.

And though it cost me a long journey of two years, filled with trial and error, joy and crushing disappointments, I eventually recovered. Completely.

I got my life back. I got my career going again. And now I’m better than ever. I’m a multi award-winning film and TV director, I have attended film festivals all over the world and I love to travel!

I had a lot of different fears and frightening thoughts. And fear of travelling stayed with me even when I was making progress with my DPDR recovery.

There were a few reasons for this. One was an intense fear of being in new places that had been brought on by Depersonalization. The other was that I'd had a terrible experience with DP while attending a family wedding abroad, and it was burnt into my memory.

I genuinely thought I might never get on a plane or travel anywhere again, the fear of Depersonalization and more panic attacks was so strong. I worried that my DP would go on for years, or never end at all.

But I made myself go on small trips, weekends away, holidays abroad -- and the fear lessened and stopped completely.

Since my recovery I have travelled to Kenya, Burundi, the US many times, Latvia, Spain, SE Asia. And in 2017 I spent 5 months travelling around India, which was an incredible experience. I even put on a photography exhibition of my travels when I got back!

Why do I mention all of this?

Because you need to understand that even that darkest fear, the thing with which you associate the DP the most, can be beaten.

This next picture was taken long after I had fully recovered, at a film festival in Washington DC.  I even won an award at it! 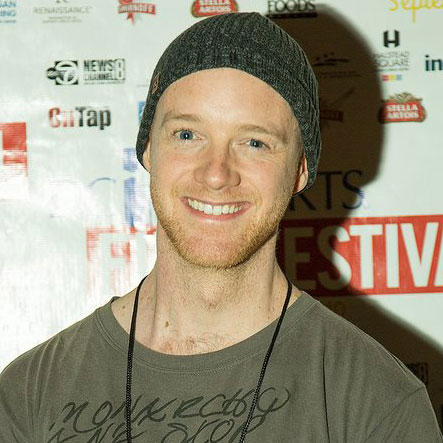 I was back to the prime of my health and feeling fantastic. And that's what I've had ever since.

It was a far cry from the crushing belief that my life, my career, even my ability to travel were all gone forever.

Of course, they weren't. Because Depersonalization recovery is 100% possible and you can and will get back to who you were before DP ever happened.

In fact, it's not only possible -- it's very common.

Thousands of people recover every day.

You can recover too.

And that means total DPDR recovery.

From the smallest annoying thoughts to the big, horrible existential fears -- All of the symptoms of Depersonalization can be stopped and you will get your life back.

Start your recovery from DP today! 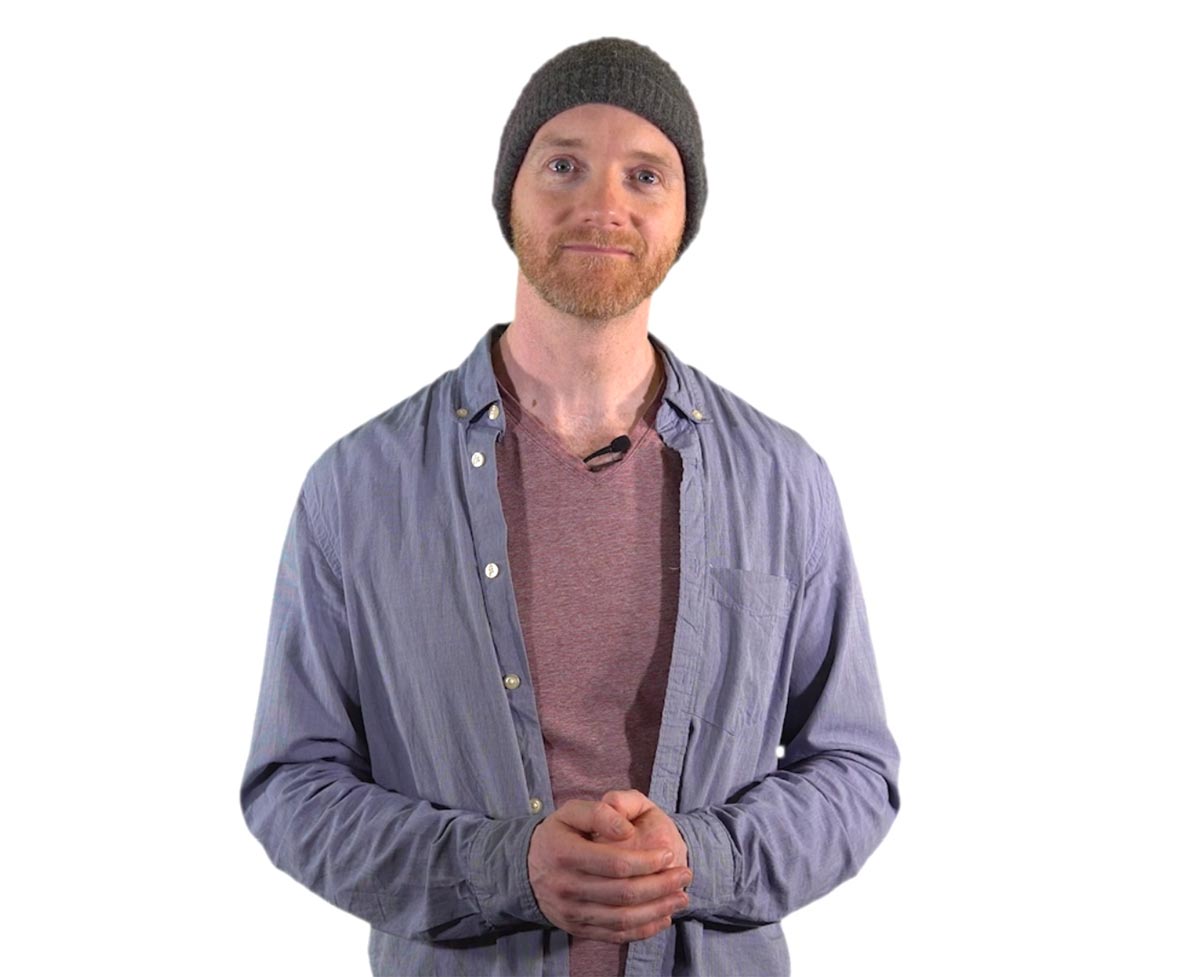 Hi there! My name's Shaun.

Back in 2005 I suddenly developed chronic Depersonalization Disorder. For almost two years my life, my career, everything went on hold. It was a living nightmare. But through much trial and error, I began to understand what was happening, and how to stop the Depersonalization symptoms, including all the terrifying thoughts and feelings. I made a TOTAL recovery, and I wrote the DP Manual to help others do exactly the same. The DP Manual Package contains everything you need to know for YOUR recovery from Depersonalization.