Depersonalization Disorder in the Media

In fact, I work in the media (TV / Film / Photography)  so it's part of my job to stay up to date with what's happening in the world.  I read widely, I follow the news, I love movies and TV.

And I've noticed that Depersonalization isn't mentioned very often. Actually, I first noticed this years ago when I developed DP and was able to find almost no information about it.

But that was back in 2005. Surely there are many more resources available today? Well, yes -- but Depersonalization is still not often mentioned in the media, at least as much as you'd expect, right? And especially when it's so common. One of the most regularly cited articles on the condition is this one from the Guardian. It's particularly important because it's specifically about Depersonalization, and not mentioning it as part of another condition like GAD or Social Anxiety. It's also important because it mentions how surprisingly common the condition is ("According to studies in both Britain and the US, DPD could affect up to 2% of the population – that is, around 1.3 million people in the UK, and 6.4 million in the US."). 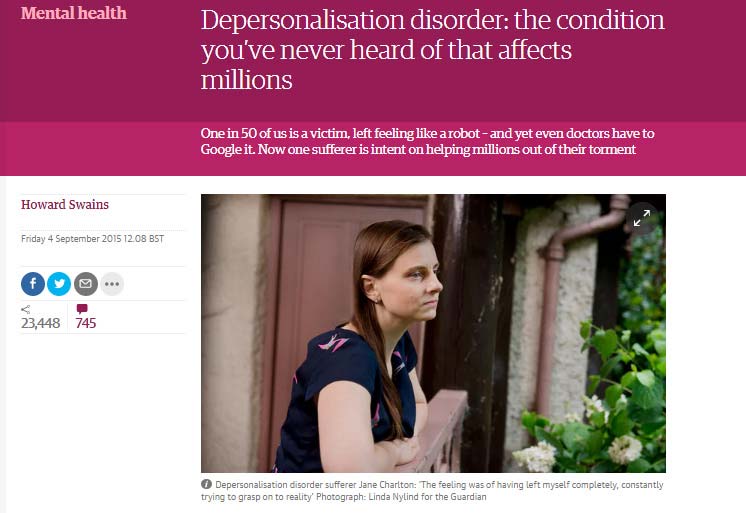 The Guardian article is also relevant because it comes from one of the world's most reputable and respected news sources (as opposed to some random blog). It's considered a watershed of sorts in the DP community. And it was only published in 2015.

That's not to say that there aren't other excellent resources on Depersonalization available online, there certainly are. But compared to the online awareness of other anxiety-spectrum disorders like agoraphobia or OCD, Depersonalization is way behind. And since rates of Depersonalization are going UP (due to the availability and higher strength of weed), you would expect it to be discussed far more frequently.

So why is DP not discussed more in the media and elsewhere? It's down to two main reasons:

1. Depersonalization is not easily diagnosed

DP is notoriously difficult to describe. With other conditions like agoraphobia or GAD, the symptoms are obviously linked to the condition and there's a predetermined treatment. But DP is so intangible that it's very difficult to verbalize. I remember saying things to health professionals like 'I feel like time is fragmented' and 'I think I might disappear'. When you say things like this it's unlikely that your doctor will recognize the condition, or even suspect that it's anxiety-based.

2. It's Often Confused with Other Conditions

When people seek treatment for DP, their doctor may send them home with a completely incorrect diagnosis and treatment. But not only that, it's very common for Depersonalization sufferers themselves to worry that they have some other condition: cancer, schizophrenia, Multiple Personality Disorder, you name it.

Unfortunately for most DP sufferers, finding what you actually have is typically the result of weeks, months, even years of research. That was certainly the case for me.

The lack of recognition of DP in the medical community filters down to patients, and from there out to the media. As the Guardian article states, Depersonalization Disorder affects 1 in every 50 people, so there should be near-constant coverage of it, but that's obviously not the case.

This has led to some pretty wrongheaded representations of DP in the media over the years. Most notoriously, an episode of Dr. Phil was about a young man who claimed his life "has been 'a living hell' since he was hospitalized with a severe panic attack after trying marijuana. He claims he has no control over his thoughts or actions." To anyone familiar with the condition this was a clear case of drug-induced Depersonalization. But for the uninformed, it's some sort of psychosomatic mystery condition. At one point Dr. Phil actually goes through the man's treatment history and sums it up with: 'We don't know what the hell's going on!'

Thankfully, in the more than a decade since my experience with DP, things have definitely improved. Depersonalization disorder is not the total mystery it once was. Celebrities like rappers Logic  and Elro, vlogger /musician Dodie have openly discussed their experiences of Depersonalization and Derealization. And there are entire YouTube channels dedicated to discussing the condition.

It's really wonderful to see Depersonalization discussed out in the open, and especially by young celebrities. Just knowing that there are other people out there with it destigmatizes the condition, makes it less scary -- a very important step towards recovery.

And while proper, consistent coverage on national television and radio may still be a few years down the line, it's also great to see articles by freelance writers in popular online sources such as Metro and Vice. Awareness of the condition is definitely better than it was back in 2005, when I developed it, but a lot of work still needs to be done.

Because the sooner that Depersonalization is talked about as the common and temporary condition that it really is, the better for the 1 in 50 people who has to deal with it at some point in their lives.

"I Googled - Not feeling human anymore"@ElroRaps talks about his experience with depersonalisation... pic.twitter.com/ueirFsKjs0